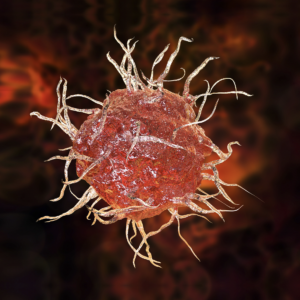 Acute myeloid leukemia (AML) is a rapidly progressing form of blood cancer that originates in the bone marrow. It is the second most common type of leukemia in the U.S. With a life-time risk of 0,5 to 1%,  it is considered an orphan disease. AML mostly affects people older than 60 years.

The root cause of AML is a defect in the differentiation of bone marrow cells which leads to the build up of immature white blood cells (blasts). These blasts quickly outgrow normal blood cells that play a vital role in clotting and immune defense and thus may lead to a slew of complications such as bleeding and infections.

After diagnosis, leukapheresis may be done to remove excess white blood cells (including leukemia cells), usually followed by standard induction chemotherapy with cytarabine (ara-C) and/or anthracyclins such as daunorubicin or idarubicin. A common treatment option is the so-called 7+3 regimen (7 days standard dose ara-C, in the first 3 days complemented by an anthracyclin).

Depending on their mutation status and genetic make-up, patients may alternatively be given targeted drugs such as midostaurin (FLT3 mutation) or gemtuzumab ozogamicin (for CD33-positive AML).

As chemotherapies also destroy most of the normal bone marrow cells, they cause low blood counts. This is why patients generally need to be substituted with thrombocytes (platelets) important for coagulation as well as red blood cells which transport oxygen.

Overall, about two thirds of the patients treated with standard induction chemo­therapy go into remission (about half of patients older than 60).

Induction chemotherapy is usually followed by consolidation therapy. Younger patients (less than 60 years) may be treated with high dose ara-C (HiDAC). These patients may also benefit from allogeneic (or auto­logous) stem cell transplants (SCT) which has a somewhat higher success rate but comes at the expense of an increased risk of death as a complica­tion of the treatment.

Older patients who do not tolerate intensive chemotherapeutic treatment may receive lower doses of ara-C or standard dose ara-C in conjunction with other chemotherapeutic drugs. A further option is non-myeloablative SCT.

Still older patients or those in poor health are generally treated with low intensity chemo­therapy (low dose cytarabine, LDAC) which may be supplemented with Venetoclax or (if certain mutations are present) with targeted drugs because high intensity chemotherapy could actually shorten their lives.